Your Ward News Being Investigated

When you publish articles on a blog such as this and cover the content that we do, you walk a fine line. You try to expose violent racist and make the public aware of the potential dangers of organized racist groups. You have a little fun pointing out how ridiculous the individuals are who exist in this subculture, and we've been pretty good at ridicule. However, you try not to give them more publicity than they warrant since many of them thrive on the attention.

If truth be told, we've often failed to be as conscientious as we probably should have been and knowing our tendency, we'll likely continue to fall short.

That being noted, we had been following "Your Ward News" out of Toronto ever since Michelle Erstikaitis began her involvement with the publication. Prior to Erstikaitis, "Your Ward News" seems to have been primarily a vehicle for attacking Toronto City Council members as well as being a big supporter of Rob Ford. It was, and still is, distributed freely to homes in the Beaches area of Toronto and claims a circulation of 50,000.

Things started to change somewhat with the arrival of Erstikaitis who continues to write for the publication despite her current involuntary stay in one of Canada's finer federal women's institutions. During the last municipal election, Erstikaitis and "Your Ward News" endorsed the following candidates in both Toronto and Mississauga:

The last name was one were not familiar with, though it seems that "Dimitri the Lover" was a fringe personality of minor notoriety in Toronto.

Yeah, creepy. And if you believe this guy, he actually had at least one "student" though we can't imagine "Pavel" was any more successful than "Dimitri" would have been.

Since the municipal election, Sears has decided to go full fascist and antisemitic. He's created an unregistered political party (the New Constitution Party) which consists mainly of himself and perhaps a few of other misanthropes. 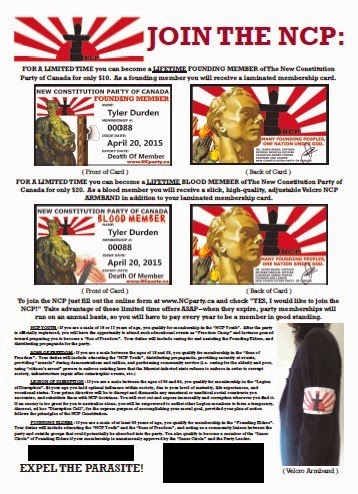 And in what is likely not much of a surprise at all, at least one of the misanthropes we've featured here is paying attention:

Sears has also taken on the role of editor in chief of "Your Ward News" which he is using as a vehicle to promote himself. Interestingly, "Your Ward News" appears to have recruited a relic of the early 90s, hiring Heritage Front spokesweasel Gary Schipper to write for the publication as well.

Now, Erstikaitis, Sears, and Schipper are all narcissists who really like to be spoken of or written about. So, we've made a point of ignoring them for the most part. But when you are using a publication with a purported circulation of 50,000 copies to promote Holocaust denial, antisemitism, and homophobia, it becomes more than a fringe group of cranks putting up poster on power line poles.

It would also seem that, finally, the police in Toronto might actually be taking these folks more seriously too:

Others are also taking proactive measures.

Warren Kinsella has been covering this story for a while now and has an idea that could go a long way towards making it difficult for "Your Ward News" to continue to be published, or at the minimum diminish it's circulation:

Your Ward News is a racist, prejudiced, hateful free publication distributed in Wards 31 and 32 (Beaches-East York) in Toronto. According to its publishers, the Neo-Nazi ‘New Constitution Party of Canada,’ Your Ward News is “Delivered by Canada Post to 48,000 homes, businesses, and apartments, with a readership of over 200,000.”

A recent issue of this hate rag contained hateful language towards ethnic and religious minorities in Canada, pro-Hitler Nazi propaganda, and references to the white supremacy movement.

Canadians Against Prejudice wants to know whether the following individuals and businesses are aware that they are advertising in a publication which supports discrimination, prejudice, and hate.

The article goes on to publish some of the businesses that advertise in "Your Ward New."

Erstikaitis is batshit crazy I wouldn't touch anything she's involved in with a ten foot pole I don't think anyone but murderers and rapist belong in jail but have to say she is probably where she belongs :S

So you continue with your internet stalking/bullying of white racists and completely ignore the black racist attacks on a white family in Calgary....

Check him out in person via this video. Guess now that all the controversy died down over his douchebag pick-up artist routine, he's going for broke with the Nazi leader thing. https://www.youtube.com/watch?v=neW-_HJ4Vjc