By now our readers might need to be reminded why this blog, which almost exclusively focuses on the racist movement in Canada, is paying so much attention to the Craig Cobb fiasco in Leith, North Dakota.

Remember when Cobb, not long after his arrest, said that if the charges were dropped he would not only leave North Dakota, but that he would like to leave the the United States as well?

Cobb, who during his brief stay in the country back in the 1970s applied for and received Canadian citizenship, might have decided it would be better to face Canadian hate crime charges than up to 35 years in a federal prison in the country of his birth.

We had opined that we were not overly concerned with Cobb's efforts to take over the small village of Leith when we first learned of the effort in August (which isn't to dismiss the stress the poor folks of the town must have been going through). In the end, we knew it was going to crash and burn. Still, even we didn't expect just how epic the failure would be.

We could post all of the screenshots of the infighting, the accusations and counter accusations, and the general sense of despair and anger that is on full display on the White Nations, VNN and Stormfront forums, but instead we'll just direct you to click on the links here, here, here, and here. The reality is that instead of reinvigorating the racist movement with a, "bold new strategy", it has resulted in a massive rift in the movement and exposed those who support and promote the ideology as anti-social misanthropes.

Because you see Craig Cobb isn't the only misanthrope.
Take London, Ontario's own Tomasz Winnicki who's frequent comments here and elsewhere rarely make the light of day. Winnicki seems to believe that it because we are intimidated by the strength of his vast intellectual abilities rather than simply deciding not to give a man, who is the equivalent of a person with a tinfoil hat yelling at fire hydrants for their involvement in the Zionist conspiracy, the time of day. Still, one of his more recent missives was illuminating, though not in the way that he would have intended:

I will stand for unrestricted free speech. Meaning that if I had the authority to institute laws of an area, there would be no forbidden/illegal speech laws, none whatsoever. There would be no slander or libel laws, anyone could say/write any far out idiocy they could possibly think of. No lawyers would be getting loaded because someone like Richard Warman decided to 'expose' himself to some (what in their subjective opinion is) hate and/or contempt and then moan he was retaliated against and demand money. At the same time, calling out idiots to public debates/shamings would be a national pastime.

We want you to imagine this ideal society that Winnicki envisions. Now imagine it populated with the likes of Winnicki, Cobb, and others like them. And then imagine them all armed to the teeth.

Yeah. I'd give that society a month at most before it collapsed into a dystopian hellscape.

What Cobb and Winnicki and others who think like them can't understand is the concept of civil society. A society exists and can thrive if the people who exist in that society can agree to certain social norms. One social norm is that it's not a great idea to go out of your way to antagonize your neighbors.

Craig Cobb, Tomasz Winnicki, and others like them (and there are a lot like them in the racist movement) provide evidence of just one of the fatal flaws in their characters. Sure, they don't like Jews or Blacks, or homosexuals, or women, but that's only part of it all.

When Craig Cobb fled Canada and ended up in Montana, he made enemies with some of his fellow travellers in Kalispell where other "white nationalists" had been encouraged to move to. In fact, rather than spending time with actual human beings, he spent a winter living in a hole in the ground, and we literally mean a hole. Winnicki doesn't seem capable of social interaction with other humans without antagonizing them. Instead, he sits in the basement of his mother's home posting on VNN and on leaving comments on the "London Free Press" website, later complaining about the' "censorship" of a private business that has decided to remove his missives from their comment sections. His attitude towards women (viewing women as little more than incubators for the next generation of, "white nationalists" while rejecting the idea that women are the intellectual equals of men) cause us to question if he has even been able to actually verbally communicate with a women.

This, ladies and gentlemen, represents a reality in the racist movement. Even now they really don't get it:

More on these later.

And as an exclamation point, we leave you with this.

Prior to their arrest, Cobb and Dutton were followed around by Dutton's partner who was videoing their encounter with Leith residents during the, "armed patrol" of the village. 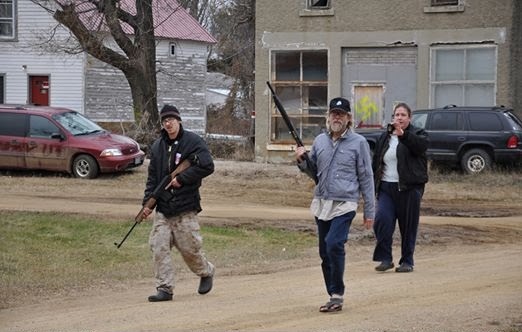 Their still hopeful supporters were CERTAIN that the video evidence would prove that Cobb and his supporters were the real victims and that the video would also be used to sue the residents into a state of poverty for their ill treatment of Cobb and co. The folks on the White Nations forum were licking their chops at the prospect of the video's release.

Here, ladies and gentlemen, is what the boneheads who support Cobb believe will be a slam dunk for their case:

First, if they felt threatened by the folks in Leith, then why would they leave their children (the eldest being only 11) at home completely alone for at least 13 minutes in this video and another 13 in another?

Second, we might suggest to those who think that this video will present Craig, Kynan, and Deborah in a positive light might wish to reconsider their earlier position.

Finally imagine a country the size of Switzerland -- the size a country Winnicki hopes for in which "white nationalists" could live together -- inhabited by people like these three.

In retrospect, a month might be far too optimistic.
Posted by Nosferatu200 at 22:11

Leith was a nearly an all-white enclave, as are most smaller towns, villages and hamlets in the US midwest, even before Cobb started up glomming up properties. Except for a token black man married to a white resident (who might have been quite useful for propaganda purposes if accusations of racism were to arise from Cobb's announced 'takeover') the whole county was already about as Aryan as poker night in Berchtesgaden before Cobb and his assorted loonies descended on Leith.

They just weren't 'racially awakened' enough to suit nutbars and nazis like Cobb &Co and they had the temerity to stand up as a group and say, "Not here, ya don't".

It`s interesting how a couple of clearly mental defectives can actually make the news.

I don`t know if it was a case of the mental defectives looking for media attention or the media looking for some village idiots to report on.

In either case, their abandonment by their comrades is telling.