October 19 Update: The Huffington Post picked up the story.
October 21 Update: The CBC has also taken on the story and features excellent commentary from Warren Kinsella.

In August Sudbury police chief Paul Pedersen apologized for being photographed with members of the Soldiers of Odin, a group that at my most charitable I would describe as a right-wing vigilante group but is even more accurately described as an anti-immigrant, Islamophobic, hate group.

So with this in mind, as the SoO has been present in Canada now since around 2015, AND since they have been the subject of a fair amount of media attention, AND since many of their members seem to have at least an affinity for organized criminal gangs such as the Hell's Angels which should alone be a cause for concern even if their anti-immigrant rhetoric is not, AND since experts on extremists groups have been warning police agencies about the dangers posed by groups such as the SoO, AND since the Sudbury police chief had to apologize in August for having his photo taken with the SoO suggesting that police in the country should be aware of who the hell the SoO are based on that incident alone, one would think it wouldn't be hard for, let's say for the sake of argument, the Winsdor police chief and mayor to find themselves in a position where they would take a photo with members of the SoO.

One would evidently be incorrect: 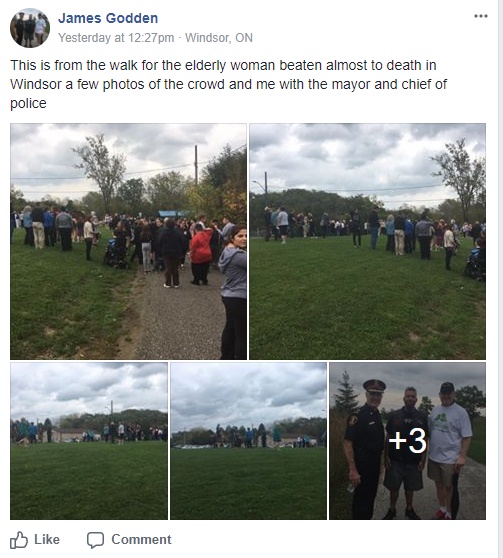 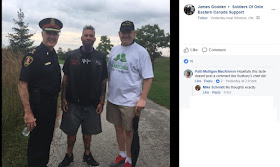 I mean, is it really THAT hard not to find oneself taking a photo with members of hate groups? Really? I've managed to get by for more than 44 years without once even accidentally having my photo taken with a member of a hate group. 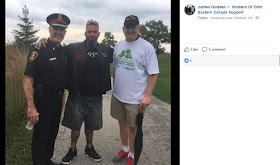 Why the hell is this so difficult?

Police who read this (and I know that there are a fair number who do), if you're wondering why minority communities often have trouble trusting the police, might I suggest that a police chief of a significant Canadian city in a photo with a member of a group that has been attacking some of the members of those minority communities does not bloody help.

And holy hell Mayor Drew Dilkens! At least when Rob Ford was photographed with a former member of Rahowa, he could reasonably argue that he had no idea who Jon Latvis was since Latvis had been out of the public eye for almost two decades. The SoO has been in the news repeatedly since late 2015. What is your excuse?