UPDATE 4: I'm actually reminded that this isn't the first story of far-right individuals who are or have been members of the Canadian military:


On Canada day, while members of the Mi'kmaw Nation held a memorial remembering MMIWG in Halifax, a local contingent of "Proud Boys" arrived to disrupt the event, because the "Proud Boys" are classy that way: 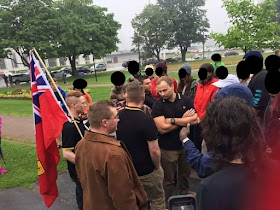 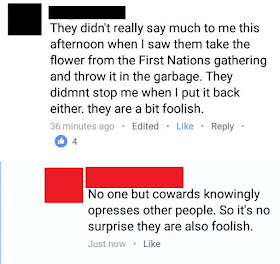 While two of the group were rather reticent about providing their names, the others were quite happy to do so:

The gang later hit the pubs to celebrate their.... victory?


As they kindly provided their names, it wasn't all that difficult to track down information about them. And the kicker is that all five of them are members of the Canadian Armed Forces:


These are John Eldridge, David Eldridge, Eric Maurice, Grant Gauchier, and one guy haven't confirmed the name yet [Braidyn Pollitt]: so-called "Proud Boys" - members of a far-right ultra-nationalist group - that turned up at the park where some Mi'kmaw folk were having a ceremony to mourn those kidnapped and murdered by the Canadian state. Most of them are also members of the armed forces [Note: all are in the Armed Forces].

We think it's important to spread their names and faces around so they can be held accountable, and also so folk can stay safe. One of the stages of membership in the organization requires committing an act of violence against an "antifascist". They might be some cowardly little shitweasles, but they *want* to be a white supremacist street organization, so keep your guard up. 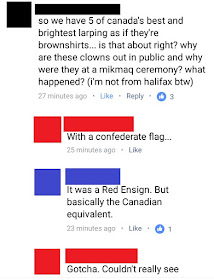 So let's take a look at our new friends:

First we have a "Proud Boy" who doesn't seem to be so proud that he is willing to provide a name. That is something that can easily be rectified: 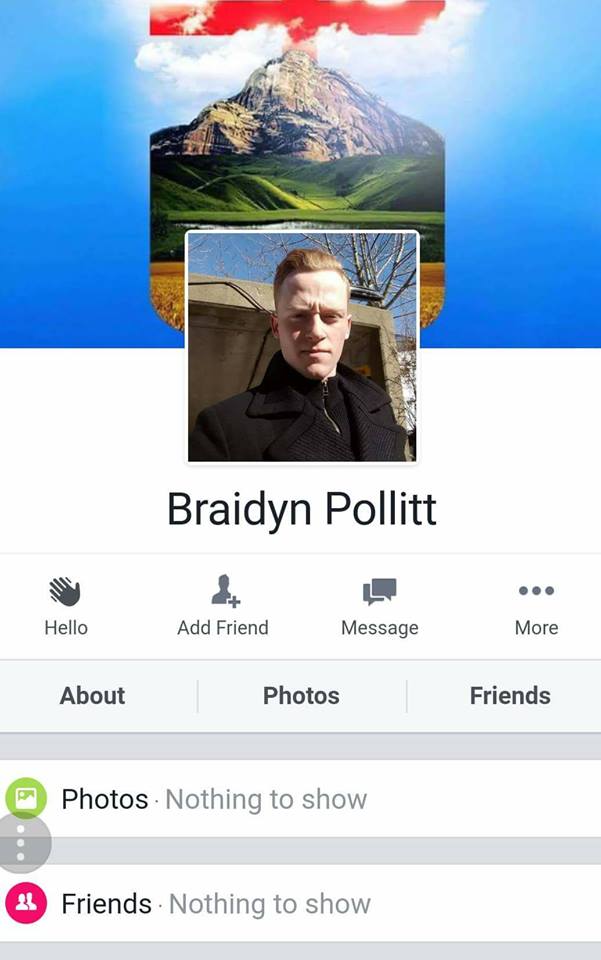 Also, and perhaps it's just me, but I can't seem to find his Facebook profile any longer. Again, why would a "Proud Boy" wish to disappear himself?

In any case, as evidenced by the caption provided by another participant in yesterday's desecration, Braidyn Pollitt is a member of the Royal Canadian Navy as are three of the remaining four who will be profiled:

Then we have the first to bravely provide his name, John Eldridge: 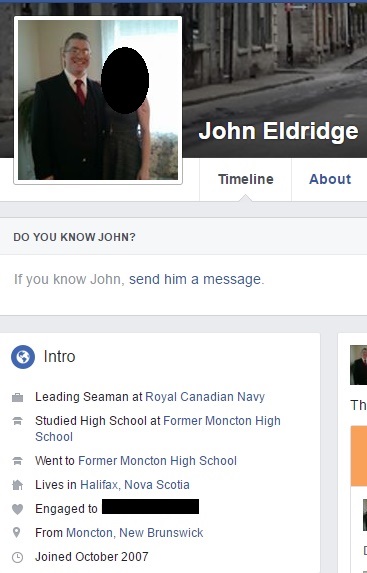 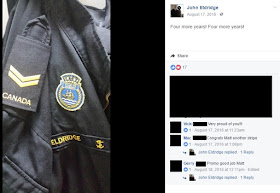 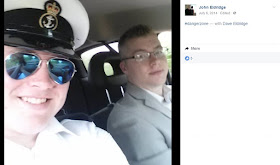 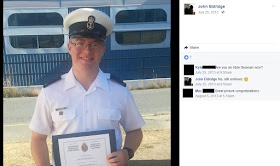 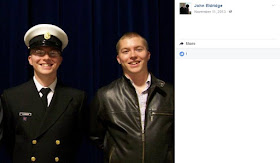 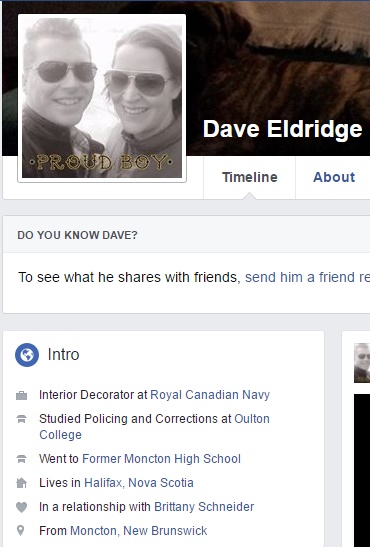 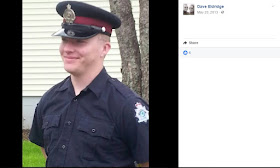 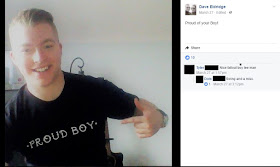 Also surprisingly shy for a "Proud Boy" is Eric Maurice who, since his identity has been discovered, has tightened up his Facebook profile, though not before someone was able to get the following screen shots: 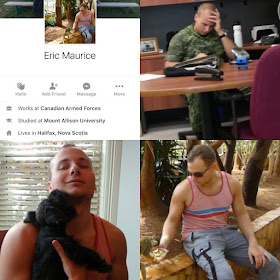 It looks as though Eric might be in a different branch of the Canadian Armed Forces and not in the Canadian Royal Navy like the others (UPDATE: seems he too is likely in the navy).

Last the fella who insisted that anyone watching the video get his name right, Grant Gauchier: 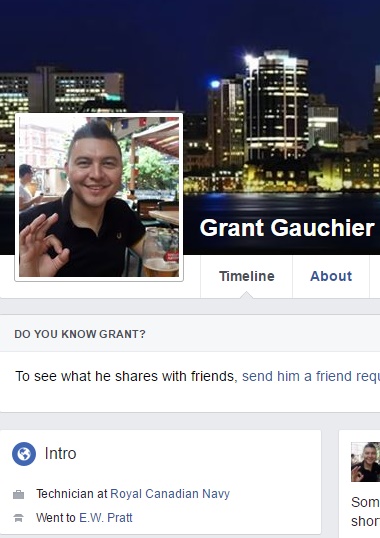 Dear god, you can smell the douchiness even before looking at the screen shots. These are from the day they disrupted the memorial: 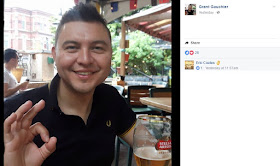 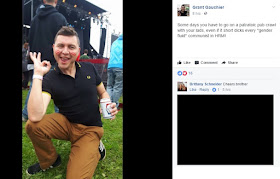 And these are him in uniform: 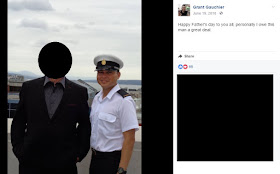 Now, if anyone thinks that the Canadian Royal Navy should be made aware of what Braidyn Pollitt John Eldridge, David Eldridge, Grant Gauchier, and Eric Maurice are up to (because goodness knows nothing bad has ever happened with overt far-right nationalists in the Canadian military before), who am I to stand in your way?

Royal Canadian Navy
Vice-Admiral Maurice Frank Ronald "Ron" Lloyd
UPDATE: Well, it seems that this has become quite a popular article as it has, in less than a day, passed "The History of Violence" as ARC's most read article.... and the numbers are still climbing.

It also seems that the collective efforts of those who are disgusted with the display by these five men are yielding some results: 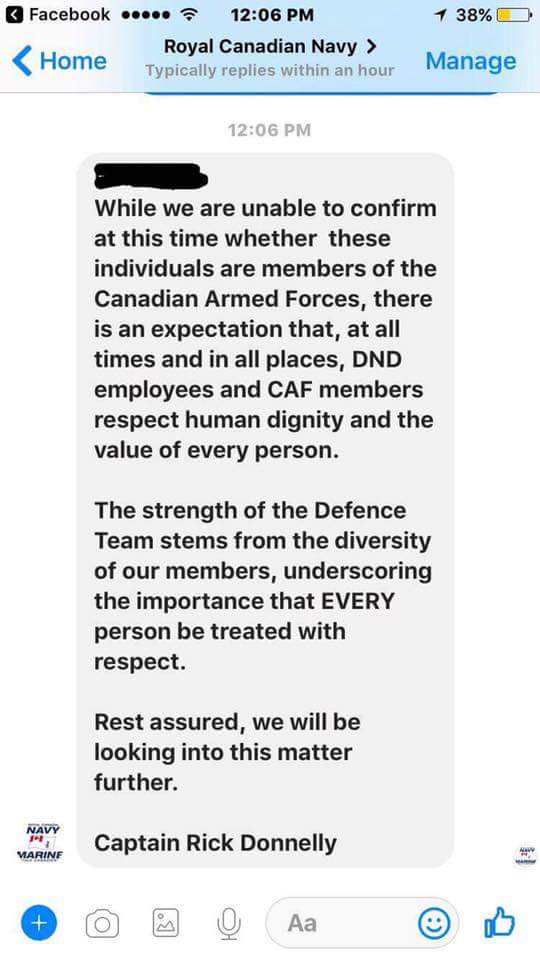 UPDATE 3: I have the feeling that these young men have very much come to regret engaging in what they termed as a "patriotic bub crawl"