First we learned a few days ago that Ryan Dean had evidently been arrested on outstanding warrants in Edmonton: 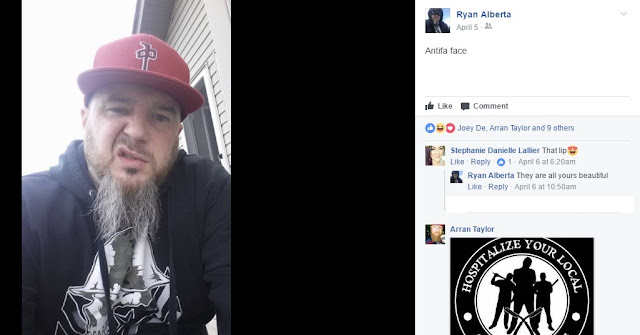 ARC readers will be familiar with Dean as an active participant in a number of anti-Muslims/anti-refugee/anti-immigrant rallies that took place during the spring and summer of 2017 primarily in Calgary but also Edmonton, Red Deer, and a few other locations in partnership with the WCAI.

Dean first came on to ARC's radar as a member of the Alberta Soldiers of Odin. He then became the Vice-president of the Guardians of Alberta before forming his own nativist group the Canadian Combat Coalition. While the CCC did expand into Ontario, this expansion ultimately resulted in Dean's expulsion from the group. He then formed the North American Freedom Fighters, though he spent much of his time at this point sniping at the Ontario CCC and creating false news stories.

The other big news is that the founder and president of the Storm Alliance has stepped down. David Tregget had been an early member of the Soldiers of Odin, serving as national vice-president and Quebec president, however after conflicts with leadership both in Canada and Finland, he left the SoO forming the Storm Alliance. While there are ostensibly chapters in other provinces, the Quebec chapter is the largest by far and has been the most successful.

The resignation of Tregget from the group be created seems to be as a result of certain allegations that have been leveled at him. In an article that came out earlier today, it appears that the allegations are related to claims that Tregget had asked a woman for "sexual favours"; the screen shots of the alleged online conversation can be found here:


The allegations against me have been brought up with only one aim in mind, to destroy me, to make me feel worse, and they’re working... For legal reasons and to protect Storm Alliance I’m quitting the organization, and will be absent from social media for an indeterminate amount of time, perhaps forever.

Should ARC receive more information, those additional details will be included in this article.

UPDATE: The following was posted by SA co-founder Colin Oleary: 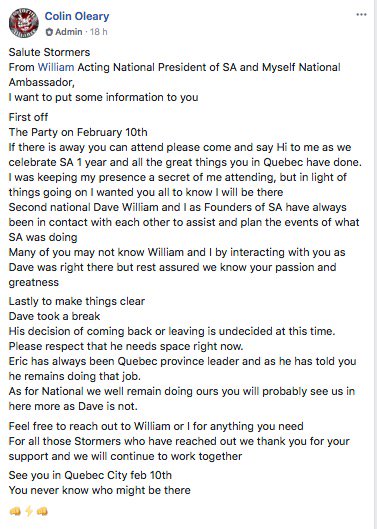